The Eglinton Crosstown Light Rail Transit (ECLRT) project consists of 19.7 km of light rail transit running along Eglinton Avenue from Mount Dennis in the west to Kennedy in the east. The project is being designed and constructed by Crosslinx Transit Solutions Contractors (Crosslinx).

The image below shows the general location of the scheme and stations including the underground section between Keele and Laird: 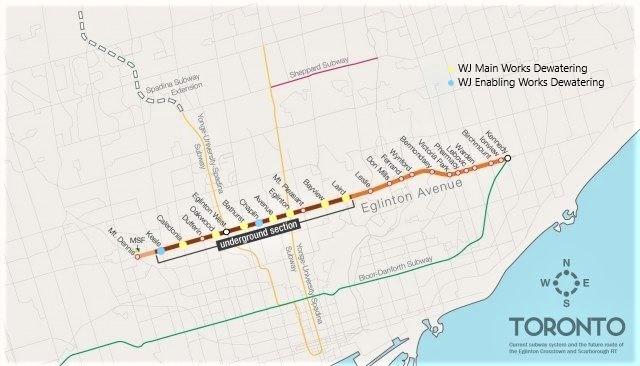 The majority of the work on the Eglinton Crosstown Light Rail has been happening below ground level since it started in October 2011, with preparation for the stations and tunnels to start taking shape, but not much had been happening above ground.

Until March 2018 that is! The Kennedy portal began construction, which is where the tunnel for trains entering and exiting the station from the underground station, to the surface. The median strip (central reservation) was removed from the road to enable the rails to be installed. This took place on Eglinton Ave E between Ionview Road and Kennedy Road (about 300m). 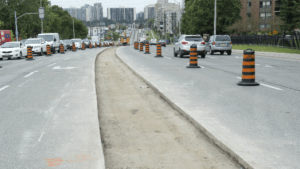 Across much of Eglinton from Victoria Park to Ionview, medians have been removed to make way for the Eglinton Crosstown

Overall, there will be 10 stations/stops on the surface in the initial line, with parts of the surface route being “green track” meaning vegetation will grow between the rails. In order to make room for the tracks, a huge coordinated effort will be undertaken along the centre of Eglinton.

“Despite the massive amount of concurrent work required to construct the surface section, we’re remaining strong in our commitment to keep everyone moving as we build the Crosstown,” said Winson Chan, Traffic and Transit Engineer. “For example, with set-ups requiring us to block off apartment driveways between Rosemount Drive and Ionview Road, we’ve made plans to build an entirely new access road for residents that bypasses the work zone.”

The traffic setup for the Kennedy portal will be similar to the setup pictured for Science Centre Station, but on a smaller scale.

The surface section of the light rail line will be around 9km, transforming the way the neighbourhoods it passes through are connected, saving time in getting about. Residents and businesses will benefit from this the most in the future, especially when the approved extension to Toronto Pearson International airport and the University of Toronto Scarborough are completed.

To see more of the work we’re doing as part of the Eglinton Crosstown Light Rail Transit system, click here.