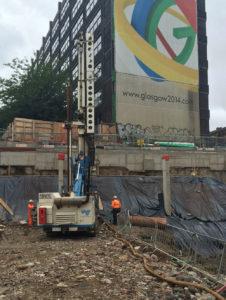 Work on the office complex, located on the corner of St Vincent Street and India Street, started in 2013. The 220,000 sq ft complex, which overlooks the M8 and Kingston Bridge, replaced Scottish Powers then-current office locations in Falkirk, and Cathcart and Yoker in Glasgow.

Once again, WJ found their expertise called upon for a basement project. The new Scottish Power Headquarters needed a basement cofferdam approximately 100m x 50m in plan. The basement walls would be formed of secant piles with toe levels extending to a minimum of 0.5m into bedrock.

While the central core was constructed, the secant piles were propped, in the short term, by internal berms largely formed within the alluvium. For this construction strategy, dewatering was required in the form of a perimeter wellpoint system installed at a reduced level within the cofferdam. Three distinct phases were implemented to control groundwater levels, principally in the alluvium deposits inside the excavation to facilitate excavation, propping and deep core foundation works.

This flexible and phased approach to the installation of the system helped the client to secure an efficient groundworks programme with significant savings in cost and time.