Recognised as one of the leading multidisciplinary research universities in the world, UCL was founded in 1826 as London’s first university. 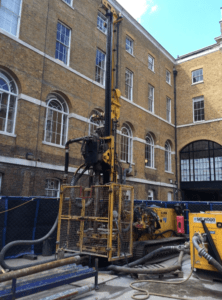 Today, it is the largest higher education institution in the city and can be found in upmarket Bloomsbury in Central London.

UCL Estates recently piloted a scheme to provide sustainable heating and cooling for the university buildings on the Bloomsbury Campus via the use of boreholes. The project would ultimately deliver a networked ground-source system and significantly and progressively improve UCL’s “green” credentials resulting in a significant improvement to the infrastructure resilience strategy for the Bloomsbury Campus.

For this project, WJ were called in as the principal contractor and entrusted with the execution of the drilling of a single chalk borehole to a depth of 110m with a finished diameter of 300mm. The borehole was then developed via acidisation, followed by pumping tests and finally recharge tests.

The Bloomsbury Campus is a bustling, enclosed yard adjacent to the campus library that sees a heavy level of people traffic year-round. WJ ensured that all works were carried out within the confines of this busy area both safely and with as little disruption as possible. While working closely with the client to minimise disruption during the works, WJ devised and implemented safe working methodologies which limited noise and vibration considerably.

Work was completed on time and, as ever, too a high standard. With a favourable and effective well yield secured, UCL can be confident that its environmental goals will be met and exceeded as further boreholes are planned for the future.