This highly exciting contract allowed WJ to branch into an entirely new area of expertise. 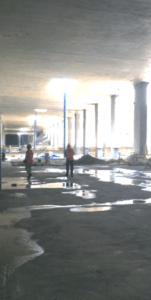 In 2014, Poland’s third-largest city, Łódź, was given the go-ahead to build a new multimodal transport interchange. The new station would bring together high-speed, long-distance and regional rail as well as local and intercity bus services at one location, ensuring quick and short interchanges for passengers. Łódź Fabryczna (Łódź Industrial), one of the city’s major railway and bus stations, would be the focal point of a new transport hub.

As part of the ongoing regeneration of the city following years of industrial decline, the new north-south and east-west high speed rail lines would ultimately link the city and Poland to the European network. Collectively, this would not only involve the construction of an ambitious new rail interchange but also a series of tunnel approach structures.

After a successful pitch, WJ won the contract to design, install and operate the dewatering system during the two-year construction phase, starting with the city centre station.

The city centre station structure was 20m deep, up to 12m below the standing groundwater level. The projected overall size of the station and tunnel was 1,500m x 500m. Groundwater modelling was initiated to maximise efficiency and minimise the external drawdown. The discharge point was some 5km from the station, so WJ’s contract also entailed the design of the discharge pipe and operation of the over pumping system.

At its peak, the dewatering volume was over 500l/sec with more than 100 wells in operation. The system, despite the close proximity to other construction activities, ran reliably during the ‘top down’ excavation and enabled the contractor to complete the excavation and base slab on time and too a very high standard.